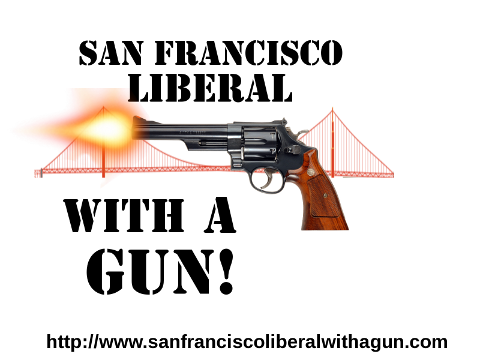 This site best viewed with

Welcome!  I am your host, "Cowboy T"!   And yes, not only am I in fact a liberal born and raised in San Francisco, California...I also have a gun.

Waitasec...how can one be a San Francisco liberal with a GUN??   Easy, and such people like me do in fact exist!   See, I have a gun precisely because I'm a liberal, not in spite of it.   Here's the longer explanation.

And while I'm at it, here is how we get more liberal folks like me on our side!  I'm living proof that it can be done...and we must.

Our focus here began with presenting videos about the Lee Pro 1000 Progressive Press and how to easily and rapidly handload common handgun ammunition with it.  Over the years, we have branched out some and included other models as well, including single-stage and turret press models.  Initially, everything I handloaded was a revolver cartridge, but I now also do semi-auto handgun cartridges, too, especially .45 ACP.  The same principle applies across the board for virtually all handgun cartridges.

Since we got started in 2010, Lee Precision has come out with other models as well, such as the Lee Pro 4000, which is basically the Pro 1000 updated to use four die stations instead of three.  The Pro 4000 also swaps out the Pro 1000's original Auto-Prime mechanism for the Classic Turret Press's Safety Prime mechanism, for added safety.  Other than that, it's essentially the same press. For revolver cartridges, generally you'll be fine with three stations, especially if you use store-bought bullets.  If you cast your own bullets, though, then the Factory Crimp Die, which post-sizes the finished handgun case, can be helpful in certain situations.  I have discovered this to be true with the .45 ACP cartridge using my own cast bullets.  If this describes your situation, then you might consider the Pro 4000.  The same principles apply to the Pro 4000 as the Pro 1000.

More recently, they've come out with a six-station press called the Pro 6000.  This press appears designed to compete with the like of Dillon Precision's XL650/750 series of presses.  Such presses are handy for a lot of things, like primer pocket swaging on the press (necessary for certain military surplus cases), a so-called "Powder Cop" die, and so on.  I quite like such six-station presses, so we include the Pro 6000 as well.

We provide videos on how to optimally load with a reloading press, how to set one up, some of the "gotchas" specific to that particular model of press, how to take one apart and put it back together again, and--most of all--the fun of "rolling your own!"

Why load progressively at all?  Why not single-stage or maybe turret?

In one word: TIME.

It's the same reason that we have microwave ovens and eat out so much these days.  This ain't the 1950's, folks.  Most people (including myself) have very busy schedules nowadays.  People simply cannot justify taking two hours to make a single box of 50 rounds.  With the turret presses, I can hit just over 100 rounds/hour; this is better.  But with a progressive, I can hit between 250 and 300/hour.  Now, that makes handloading workable into my schedule.  To become a good shooter, you've got to practice.  A lot.  Progressive reloading is what makes that not just affordable, but also feasible, time-wise.  Handgunners are especially suited to progressive reloading after learning the basics.  Most people these days shoot handguns most often, and to get practice, you need plenty of ammo for that handgun.

That said, we do show you how to reload on a single-stage press setup, and I firmly believe that this is the best and safest way to learn how to reload.  We also show you how to reload with a turret press.  Neither method is "bad".  Indeed, reloading single-stage and turret can have certain benefits of precision when doing rifle rounds.  Since rifles can shoot very precisely, especially bolt-action rifles, it's good to be able to wring every bit of precision out of them that we can.  The good reloader knows both of these methods before going progressive.

Here's what one can do with well-made rifle ammunition and a bolt gun.  Note that I had done this with factory match ammunition, and my groups, now that my marksmanship has improved, are tighter today then they were when this was first done.  The goal of handloading rifle ammunition is to create your own "match ammo", not only saving money per round, but also tuning the ammo specifically for your rifle.  Doing this wrings every bit of precision shooting out of your rifle that it is capable of, even more in most cases than factory match ammunition.  All of the competitive long-distance shooters use their own handloaded ammunition, and it shows.

Why focus on the Lee progressive presses?  Why not the Dillons, RCBS's, Hornadys, and so on?

Another excellent question.  Other companies make very fine gear.  The answer is twofold.

First, the Lee presses such as the Pro 1000 are actually affordable by mere mortals like me.  My goal is to get folks who don't currently handload to consider the hobby.  While the Dillon/RCBS/Hornady/OtherRollsRoyce gear are all very fine gear, their price tags are just too high to get new folks into it.  Here's an example.  As of December 2022, a four-station Dillon RL550 progressive press set up with comparable features as the Lee Pro 1000 runs right about US $1,000.  The Pro 1000, by contrast, is right about US $250.  New folks are much more willing to spend $250 than $1,000.

The difference gets even more pronounced when comparing the six-station Lee Pro 6000 to, say, Dillon's six-station XL750 model.

Second, the Pro 1000 has gotten some bad press from some who've had less than good experiences with it.   I consider this a shame because it's actually a fine progressive press.  I have two of them, and I can now consistently load 300 rounds/hour with either one of them.   NOTE: this includes refilling the primer tray, the powder hopper, and the case feeder tubes, as well as boxing up the resulting ammo, all over a full 60 minutes.   I've been known to regularly make and fill six boxes of 50 rounds (that's 300/hour) with the .45 Colt press.  We have a video here showing the results of just such a .45 Colt session.

OK, but why not the Load-Master?

I actually own a Load-Master.  It takes a bit of modification with it to get the press to reliably make ammunition, specifically with the priming system.   Once the modification is done, I can load 250 rounds of .45 ACP per hour.  However, the Pro 1000 lets me go even faster, and even more reliably, so I now prefer it.

That said, I have nothing against the Load-Master.  Like the Pro 1000, it too is a fine progressive press which has gotten somewhat unfairly maligned.  With the necessary modifications, it does load ammunition pretty reliably.

Glad you asked!  This is a surprisingly affordable six-station press that appears to be the Load-Master's spiritual successor, with an improved priming mechanism.   Yes, we will be addressing that press model as well.

This page is inspired by two other Internet sites.

The first inspiration is a (sadly!) now-discontinued Web site, www.ammosmith.com, a wonderful discussion and instructional forum from which I learned a lot.  Additionally, Mr. "Ammosmith" had made several very helpful videos (still available on YouTube) about reloading in general.   I participated in their forums as "Cowboy T".   Ammosmith himself happens to be one of those who's had troubles with his Pro 1000 press and has given up on it.   He's an expert, a long-time handloader with TONS of experience, and so if even he had challenges with it, that tells me that there's a definite need for videos like what we feature here.

The second inspiration is another sadly discontinued Web site, the excellent LoadMaster Zone, over at loadmastervideos.com.   Those guys did some great videos about the Lee Load-Master progressive press.  However, I had not found much for similar videos for the Load-Master's little brother, the Pro 1000.   This Web site fixes that deficiency.

Please feel free to email me at "cowboyt" at (the domain name for this web site).


Email spammers can email me at any of these locations.